Forging a Path in the Craft Beer Movement

Over the past five years Pennsylvania Libations has built a proven track record in the beverage industry.

The first brick-and-mortar spirits retailer in the state of Pennsylvania outside of the state-run system has evolved from the flagship store to include a portfolio that also includes high-quality wines and has built a wholesale department that helps distribute local craft products to a growing number of on-premise accounts.

But in recent years, the company has quietly built a reputation as an innovator and disrupter in the world of beer. And the launch of Pittsburgh’s newest brewery – Bonafide Beer Co. — is the latest sign that the world’s largest combined collection of Pennsylvania-made distilled spirits, wines, beer and specialty beverages is continuing to grow.

Head Brewer Travis Tuttle’s philosophy revolves around easy-drinking lagers, sessionable IPAs and international favorites like dry Irish stouts and Kolsch. They make beers that are meant to be enjoyed with friends—the perfect brew for your next get together.

“Drinking is a social thing,” Tuttle said. “Making good memories around a campfire drinking a beer. Tailgates parties. Summer barbeques and picnics. That’s what we envision as a company.”

The newly launched Bonafide Brewery is located at 155 21st Street – just around the corner from the Pennsylvania Libations Strip District spirits shop. The beautiful fit-out of the building highlights vintage furniture and fixtures and gives customers the feeling of drinking in a Prohibition speakeasy.

The 2 barrel ‘nano-brewery’ is just the beginning for the new brand. Within the first year, a 10 barrel brewhouse with 200 barrels of fermentation space in Hazelwood – a project that will share resources between multiple craft breweries – will lead to statewide distribution utilizing Pennsylvania Libations expansive sales and wholesale network.

Simmons is the owner of Pennsylvania Libations and Tuttle a former warehouse manager. But for the pair, the launch of the brewery and foray into the world-of-beer has been a story of going back to basics.

“We dreamt up this company and the brand Bonafide – the definition of which means true and honest and genuine, without deceit. It fits so well with what we want to do,” Simmons said.

Co-owners Christian Simmons and Travis Tuttle both started out in the craft beer scene. Simmons started out as a co-founder of the Four Seasons Brewing Company in Latrobe before founding Pennsylvania Libations. Tuttle help found the Butler Brew Works and remains an owner partner of the brand.

The pair said they were working to help improve the image of the beverage industry.

“Trust and honesty are important to us as a brand and a company,” Tuttle said. “We’ve both been around this industry and have learned the importance of creating a good, solid business. Always fair and honest. That’s the big picture.”

Bonafide Brewery is not the only endeavor launched by industry experts tied to Pennsylvania Libations. Earlier this summer, the Sweet Rust whiskey brand jumped onto the scene. Led by Christian Simmons and PA Libations veterans Zachary Fischer, Aaron Kendeall and Noah Livingston, it has quickly gained traction to become one of Pennsylvania’s fastest-growing whiskey brands.

Those looking for expertise in successfully navigating the states complicated, state-controlled system have found the professionals at Pennsylvania Libations to be the best source of finding innovative pathways to market. For example, PA Libations recently pioneered a converged craft beverage environment for local producer Helltown Brewing. The 1700 Penn Avenue location served as a combined taphouse, wine shop, mixology-focused cocktail lounge and smokehouse.

The management of Pennsylvania Libations was involved heavily in the launch of the 1700 concept and helped it remain profitably throughout the pandemic. When management was transferred back to Helltown’s leadership, they had a fully formed, successful concept with which they could hit the ground running.

The learnings gained will help guide the approach at Bonafide. 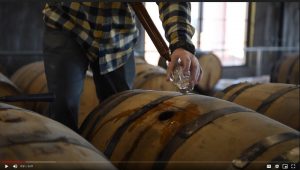 Behind the Still: Hidden Still Spirits

https://www.youtube.com/watch?v=rJzS6zr-gy4&t=2s On a cold and sunny day late this winter, we had a chat with Coty Edwards, head distiller at Hidden Still Spirits in Hershey,